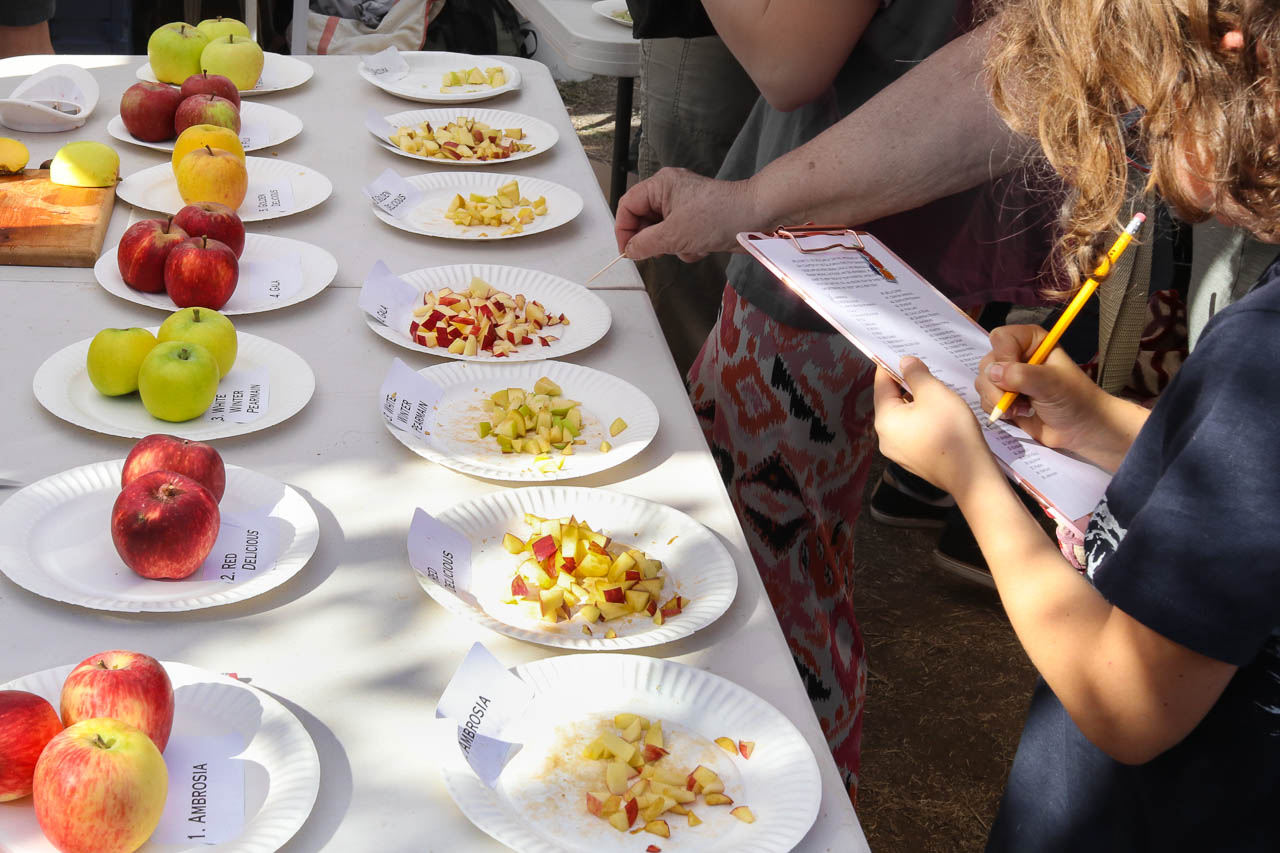 Rankings and images of all 77 varieties from the 2018 Monterey Bay CRFG Apple Tasting at conclusion.

The taste for apples is strong: this annual apple tasting, our thirty-somethingth, was one of our best-attended to date, with around 500 tasters. Look for scionwood of many of these heirloom and novel varieties at our upcoming scion exchange.  Update: Read some additional notes on the novel, locally bred varieties sampled at this tasting.  Update 2: See the video filmed at our 2018 tasting.

The Monterey Bay Chapter of the CRFG couldn’t ask for a better climate for growing apples. Thanks to our cool, coastal summers and extra-long growing-season, in the right micro-climate we can produce just about any apple variety worth cultivating.   Our annual, late fall apple tasting at Santa Cruz’s Wilder Ranch has proven to be a perfect match of timing and location.

October 20th is pretty late in the year to try to round-up over 70 varieties of apples, but you put a date on the calendar, and never really know what will turn up. Will it be an early year for ripening like last year? 2017’s tasting included sweet and musky Hauer apples, only slightly sour Lady Williams, and rich, ripe Allen’s Everlasting, showcasing the central coast’s distinction of being able to finish fruit that few other places on earth can ripen.

This year was an entirely different creature. With the season running a full four weeks late, mid-October this year acted like mid-September, and everything was still on the trees. We could have picked nice Gravensteins for the event!  We had to cull hard to hold the entries to under a hundred, and ended up with 77. The late varieties I tend to favor were all on the harsh and chalky side, but we had a full array of early and mid-season types.

The weather was perfect, the turnout was huge, we had lines till nearly the end of the day. Our tasting works with everyone starting off with a variety list and a toothpick, and beginning at apple #1. The fruits are numbered and arranged from mild to tart on the tables, so the first apples are sweet and accessible, gradually building as you progress around the tables toward bold, high-flavored, and unusual.  The tasting typically ends with Albert Etter’s and other red-fleshed types.

Each taster typically jots notes, on the list provided, of apples that catch their attention for one reason or another, singling out ones they loved or hated. Beyond the last table is a large poster with all the entries listed in order.  We are interested in the data; not sure if anyone actually bets, but there are definitely apples that generate a buzz. It is fun, and often surprising to figure out which apple is selected as “the best”.

Every year (and we have been doing this for 19) we encourage our tasters to vote on which 3 apples are their favorites. We struggled for a decade with schemes to coerce or convince people to cast their votes; never had much success. Solved the riddle of the sphinx about a decade ago by issuing each taster 3 shiny foil stars like you were given for good behavior or high achievement in kindergarten.  Nobody can resist the opportunity to weigh-in with their shiny gold, green, red or blue symbols of success.

So people cast their votes, and it’s fun to find out the winner, but it’s sometimes just as interesting to see what the losers are. Crazy this year to discover that out of 77 radically varied apple varieties, not one of them received less than two votes. All of the entries were selected for their quality, and we threw out, in advance, fruit that was over or under-ripe, but there has to be a loser in any contest.  Arlet and Jupiter, two apples that can be impressively aromatic early in the season, rounded out the bottom this year, neither one of them bad, both certainly a little past peak. All the apples on the lower end of this list could be considered victims of the ferocious level of competition.

At the other end of the spectrum, we had Brushy Mountain Limbertwig as the runaway victor.  Consistently in the top three for us, it has a combination of qualities that are hard to beat: Great, yet highly accessible flavor. It’s sweet with a fabulous texture and crunch, but it’s balancing acidity and banana/vanilla aromatics keep it out of the “beginner apple” category. Hailing from the humid South, we promote this North Carolina native as a great choice for globally warmed backyards and orchards, since it’s fairly low-chill, heat and sunburn resistant. Nice also that it ripens over a long period, so can be counted on from late September to mid-November in the case of this year.

The rest of the apples in the top seventeen were surprisingly heavy in the sweet and mild types: 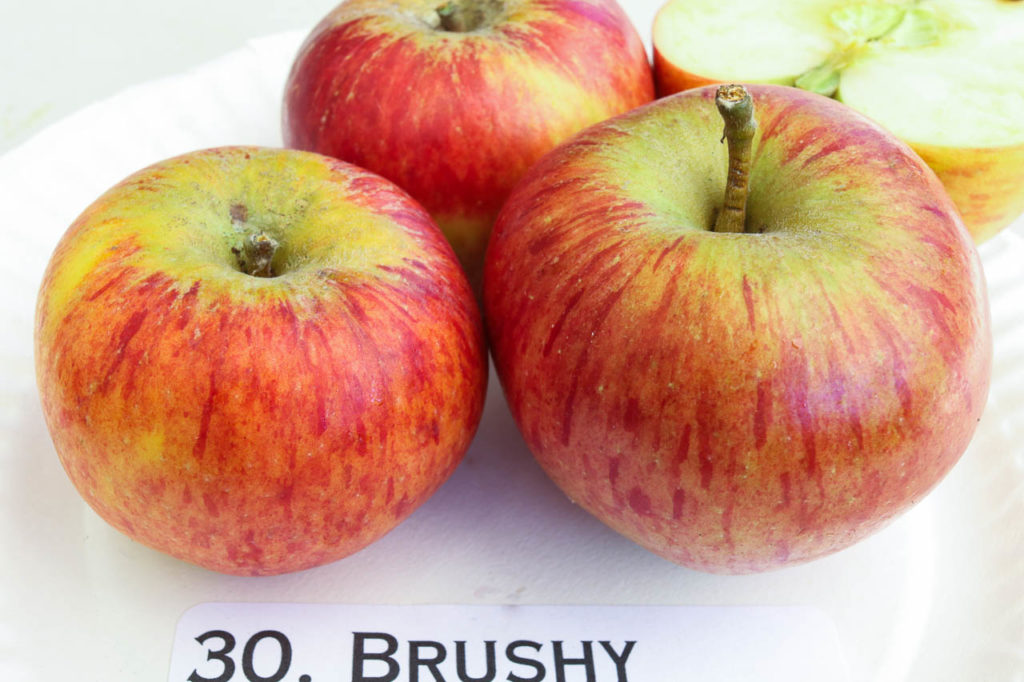 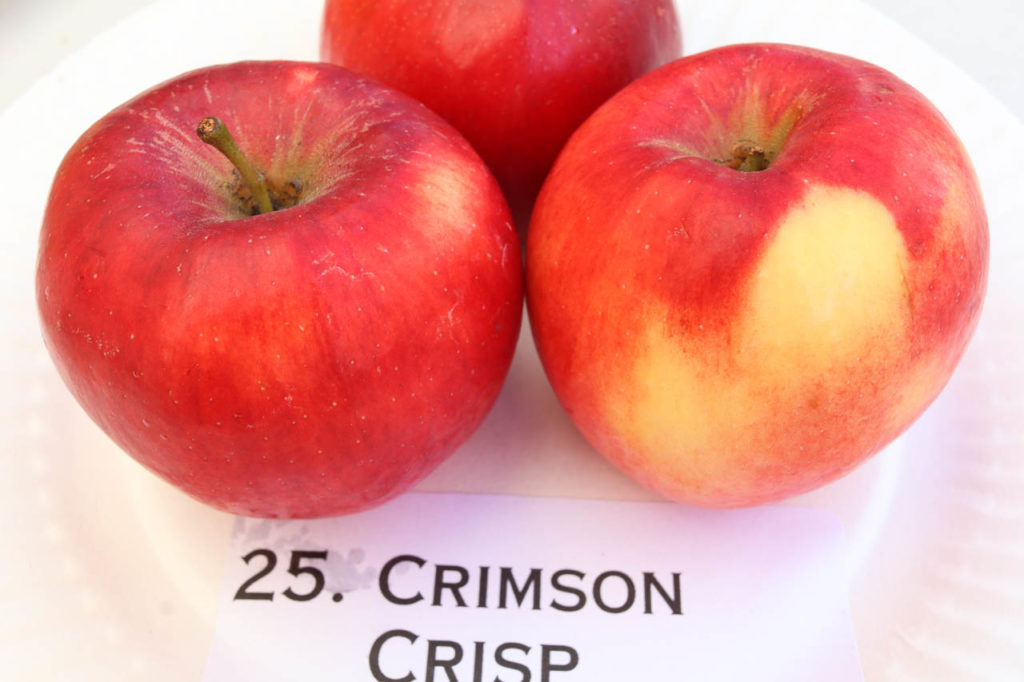 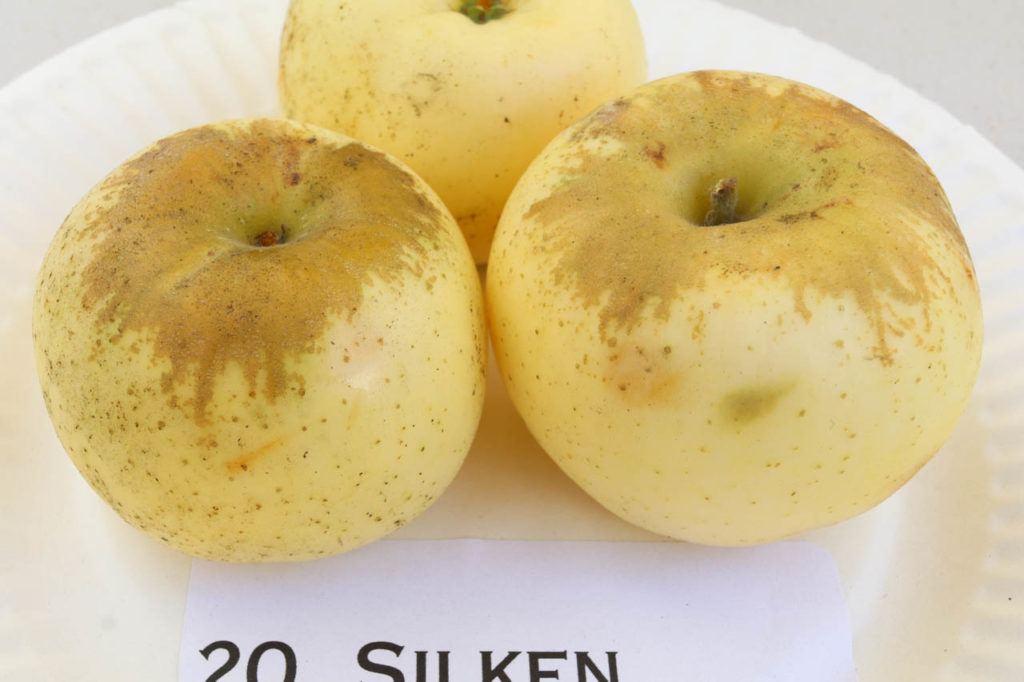 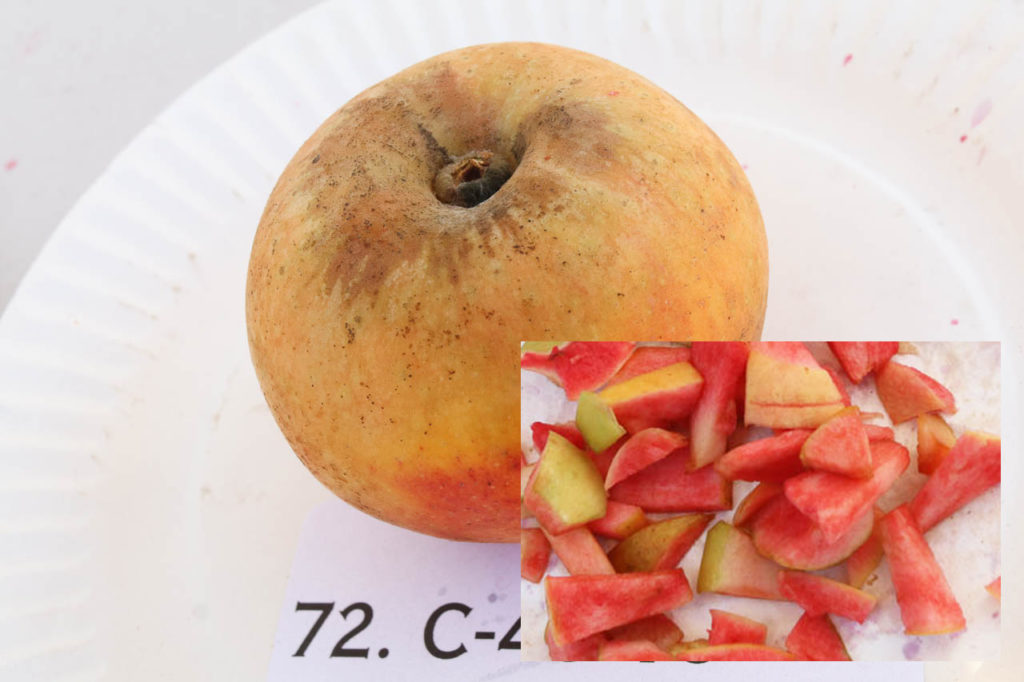 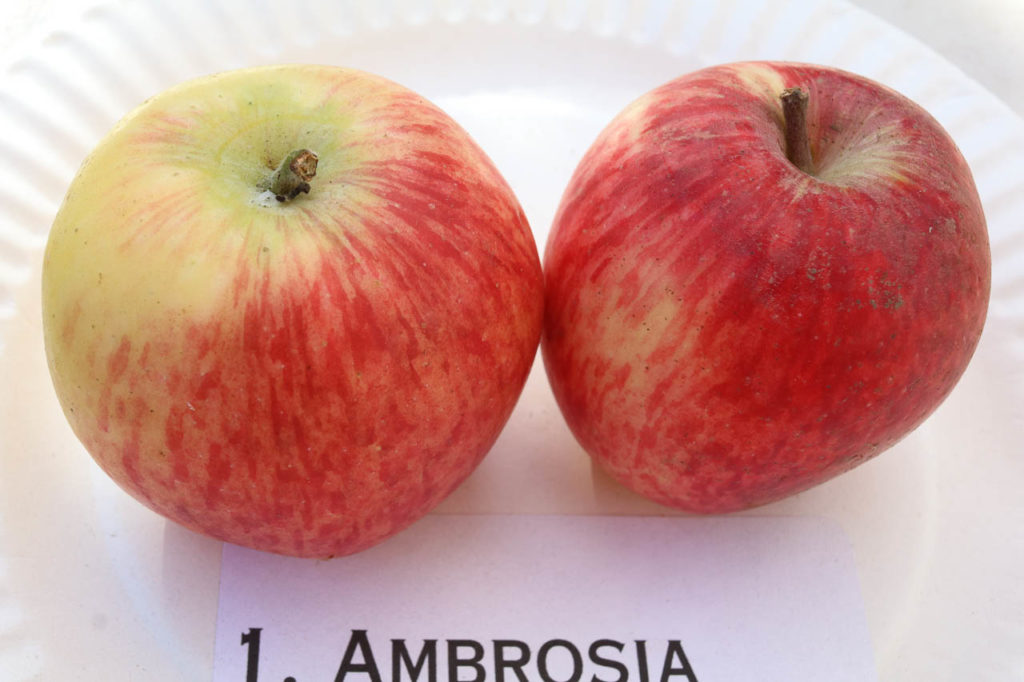 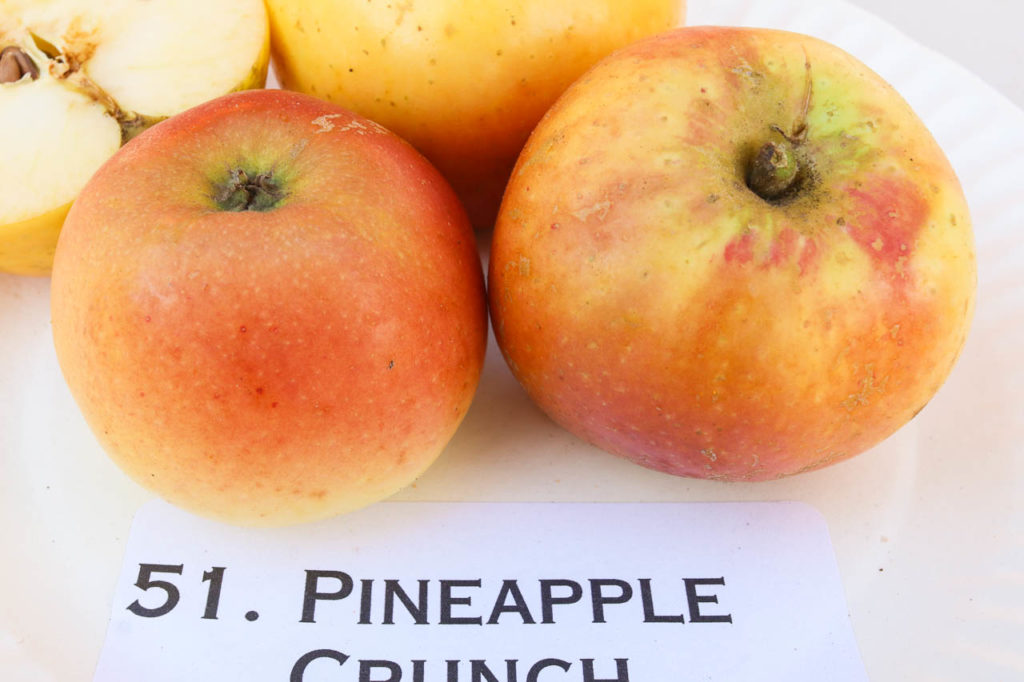 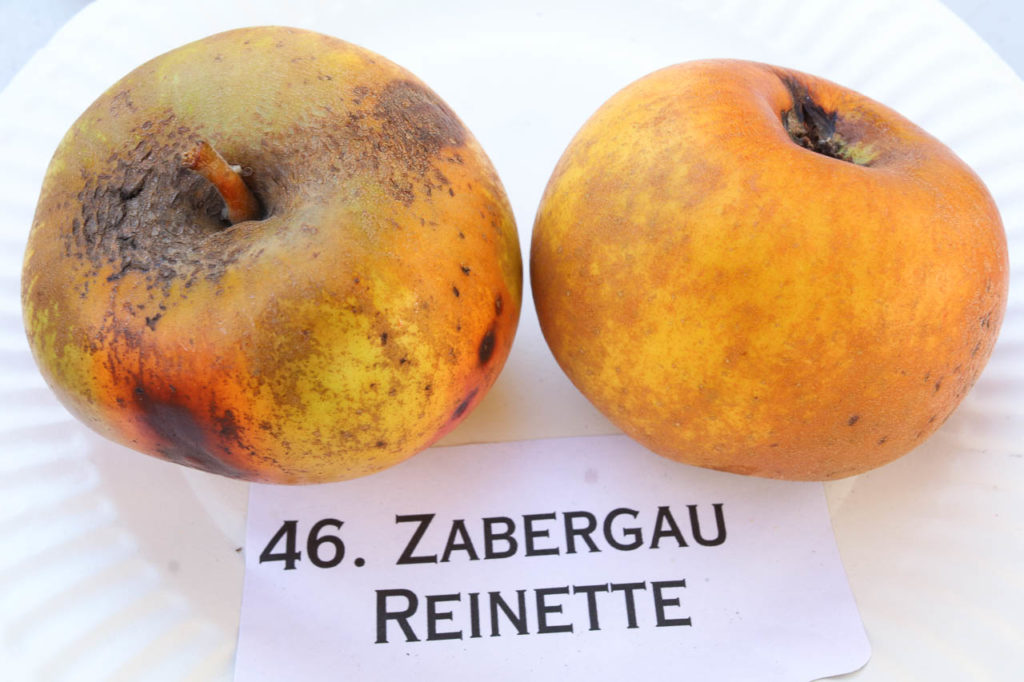 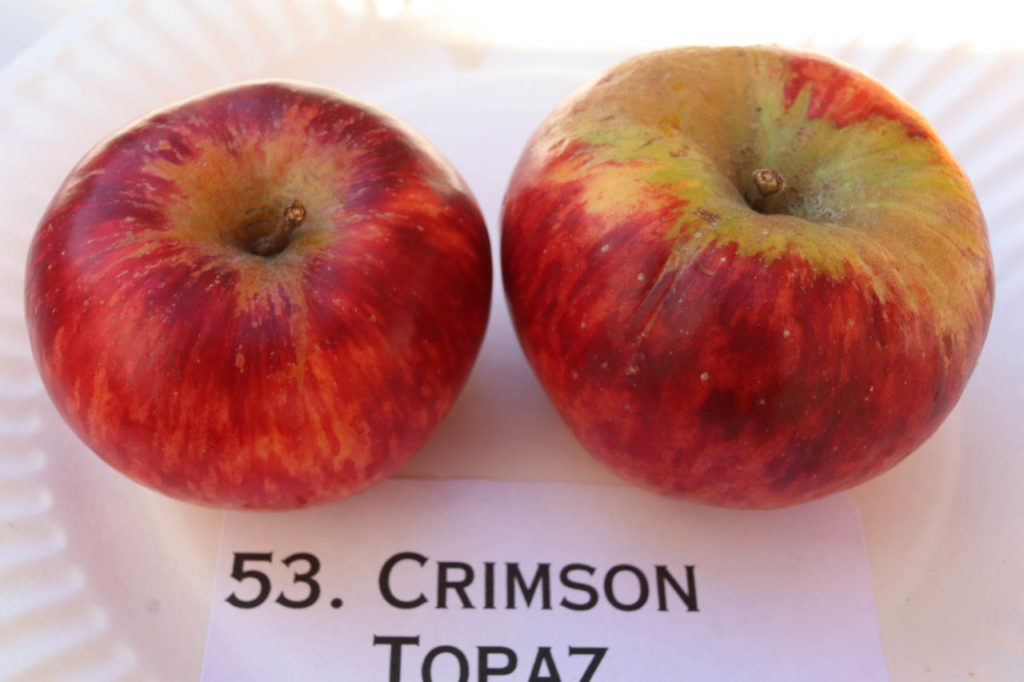 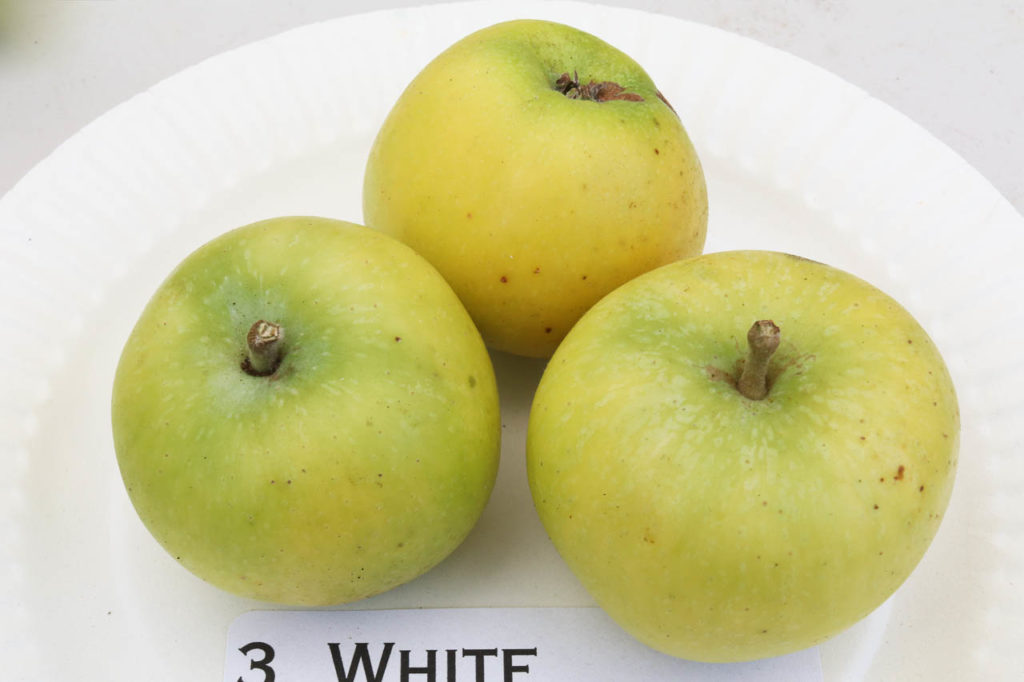 Many of these apples were first-timers on the leaderboard and I have not a clue what they have in common, and suspect it’s nothing, besides perhaps brix level.  Crimson Crisp and Topaz, Snapdragon, Pineapple Crunch (last year’s winner), and Stardust all have a good breaking bite, which for some people is everything.  Silken, and the very flavorful pink fleshed C-43-10 (the result of Jim Rider’s extensive apple breeding project), were both dangerously tender. Zabergau Reinette was all musk.  Rubaiyat was very red, but not very ripe. Ambrosia plays Jekyll and Hyde every year, depending on whether it hits the skinny, aromatic sweetspot between chalky greenness and overripe, dry, grainy mush.  Many of these apples could never have made it onto this October 20 list at all, had it not been a strangely late year.

These are the results of the October 20, 2018 apple tasting held by the Monterey Bay Chapter of the California Rare Fruit Growers at Wilder Ranch State Park in Santa Cruz, CA.  Images of the seventy-seven varieties tasted this day are ordered by ranking.  Number of taster votes indicated in parenthesis.  Click thumbnail to enlarge. 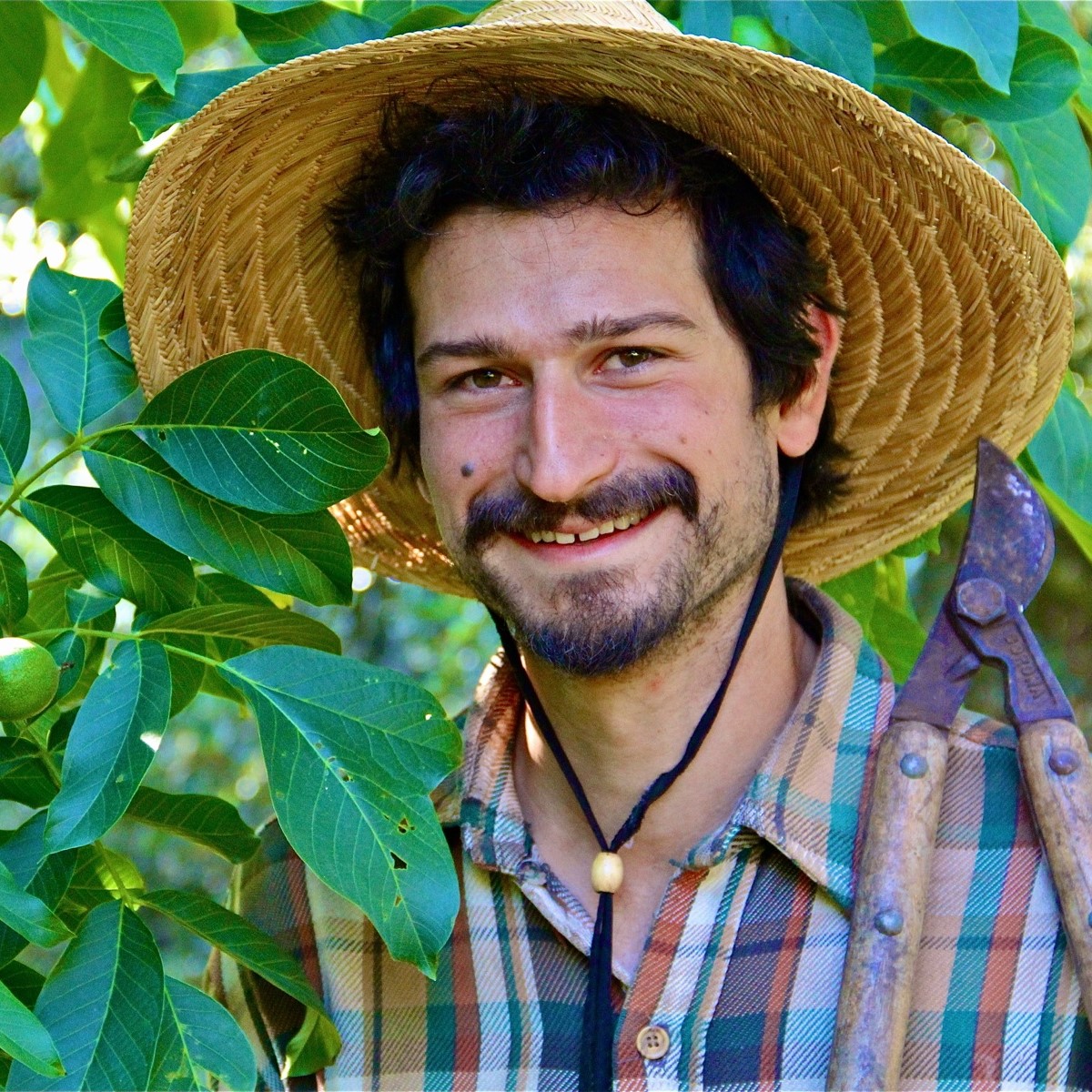 Andy Moskowitz does ecological garden design and fine horticulture in Santa Cruz, California, is director of the Santa Cruz Community Orchard, and has served as Chairman (2019, 2020) and other roles for MBCRFG.